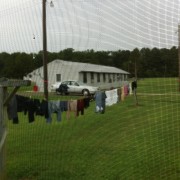 What is now known as Westover labor camp located on Route 13 south of Princess Anne in Somerset County was originally Camp Somerset, a Civilian Conservation Corp camp that was built in 1935. When it was first built, it housed 270 men in about 17 buildings including a kitchen, a mess hall, a recreation hall, officers quarters, pumping station, and a bath. The men who lived in the camp cleared tax ditches and worked on drainage projects in the area.

During World War II, the camp was converted into army post headquarters for the nearby Berlin, Chincoteague, and Oyster areas to guard US shoreline. At the height of the war, the camp housed close to 1000 men with the addition of more buildings. In 1944, all residents of Camp Somerset were relocated to Camp Pemberton, VA. The empty camp was used to house over 1000 German Prisoners of War (POWs) and hundreds of US army guards. The prisoners were contracted out to canning houses, sawmills, meat packing plants and farms throughout Somerset County. The POWs were held at Camp Somerset until mid-1946 and were than sent to England to be returned to Germany.

Since then, Camp Somerset has served as a migrant worker camp. Now called Westover labor camp, it has long been notorious for its squalid and inhumane living conditions. In a 1983 report titled “Migrant Workers on Maryland’s Eastern Shore” by the Maryland Advisory Committee to the United States Commission on Civil Rights, the authors provide a vivid description of the camp:

Westover Labor Camp located in Somerset County south of Princess Anne Maryland, is one of the largest of the migrant camps in operation on the East Coast…. Westover is a sprawling complex of two dozen barracks-type buildings, separated by stretches of grass and dirt roads. Families live in single-room units without running water. Most units have refrigerators and small gas plates for cooking; sometimes doors, sometimes not. The single window is sometimes screened, sometimes not. Latrines offer stools without stalls, gang showers with no privacy, grime-crusted lavatories.

Just as prisons, Ghettos, and sin strips have their own notoriety, the complex of long, gray weather-beaten buildings along the highway … has achieved a special renown. Past the cree where people fill their jugs with drinking water, up the dusty road past the signs that warn visitors away, around the ditches filled with stagnant water and the gaping bins of garbage, this is the Westover farm labor camp.

The Westover camp, once a World War II holding pen for German prisoners, has acquired such notoriety that migrants from as far away as Texas refuse to stay there.

It is the biggest and most infamous among dozens of rundown caps amid the fecund vegetable fields on the Eastern Shore of Maryland, Delaware, and Virginia. Maryland’s Commission on Migratory and Seasonal Farm Labor is so exercised about Westover that it wants Governor Harry Hughes to close the place.

We visited the camp in August 2014, and I am astonished at the camp’s cleanliness and upkeep. A provider described Westover as “the Hilton of migrant camps.” 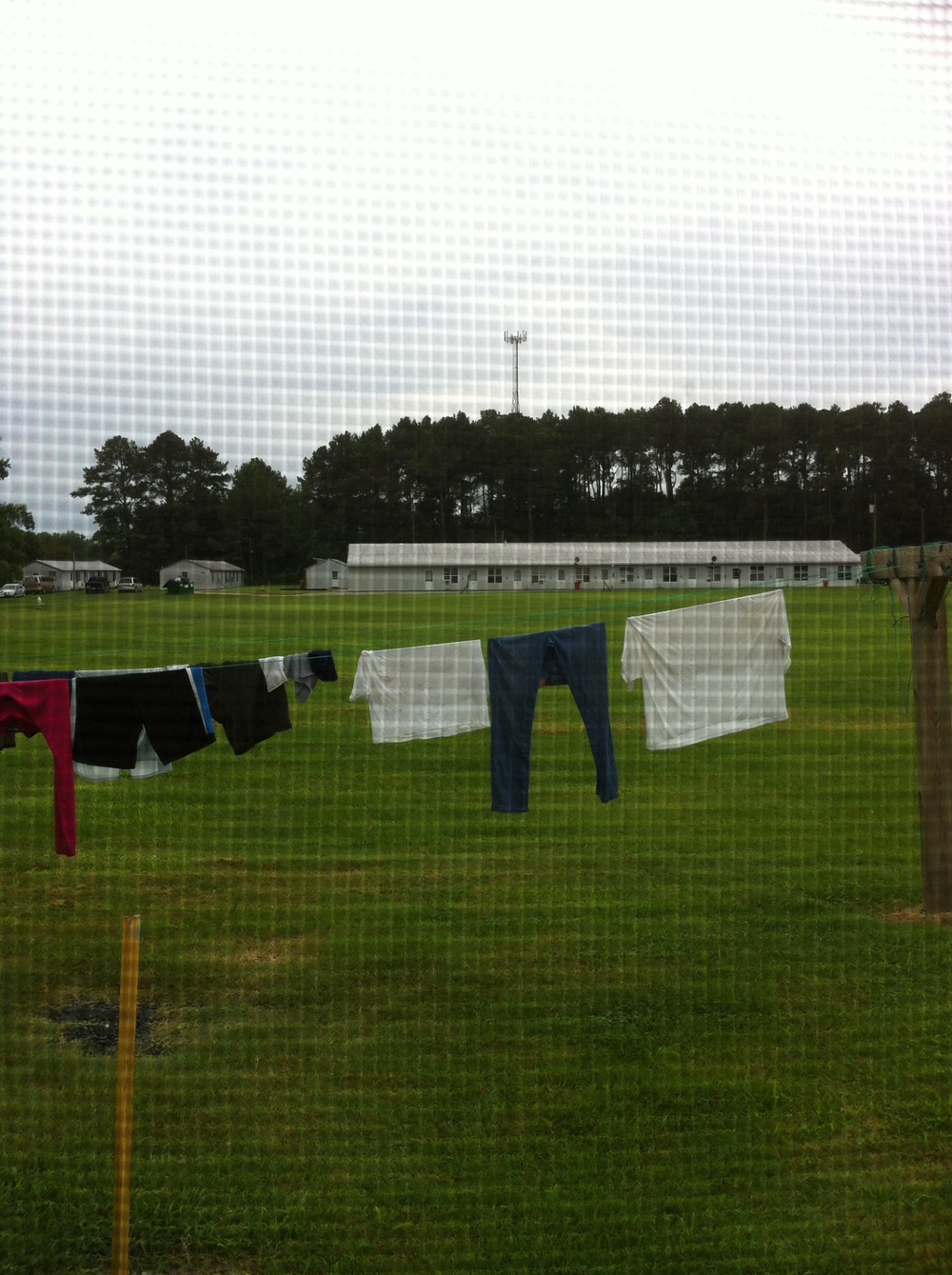 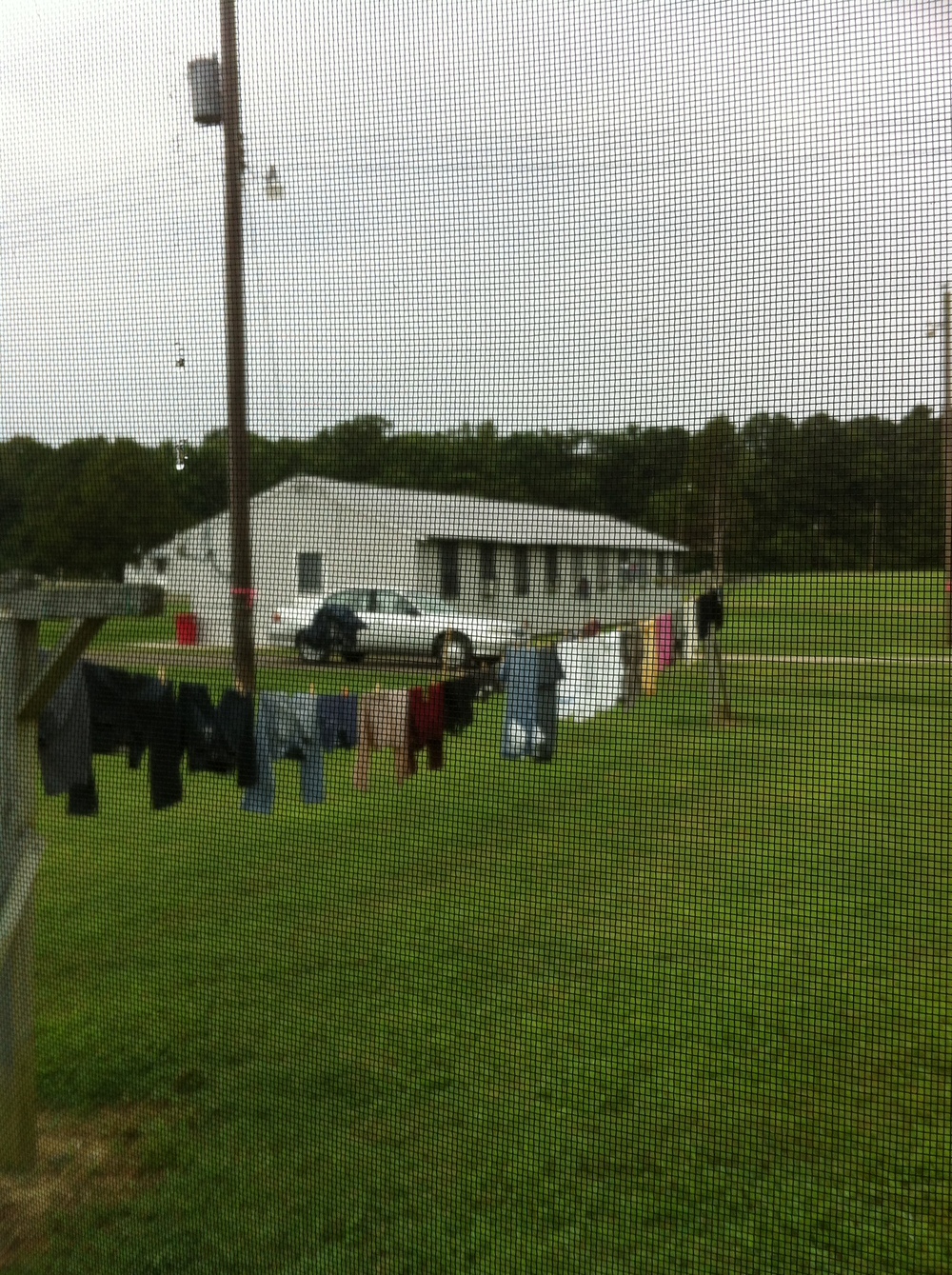 Our visit coincided with the last bus pick-up for tomato packers. As we pass through the main pavilion at the outskirts of the camp into the living quarters, a woman and her husband were cleaning the common bathrooms for that living section, presumably after the morning rush. The bathroom is one long building, much like the living quarters, with one side for men and the other for women. After a row of several toilet stalls (all with doors), there are rows of single showers (with clean shower curtains). Across from these rows are several sinks. At the end of the unit, we find large sinks, presumably for washing clothes. To my absolute surprise as that of the outreach worker, we see two brand new state-of-the-art tankless water heaters. The couple remarked that it was just installed and that it worked really well. Old laminated health department posters lined the walls. 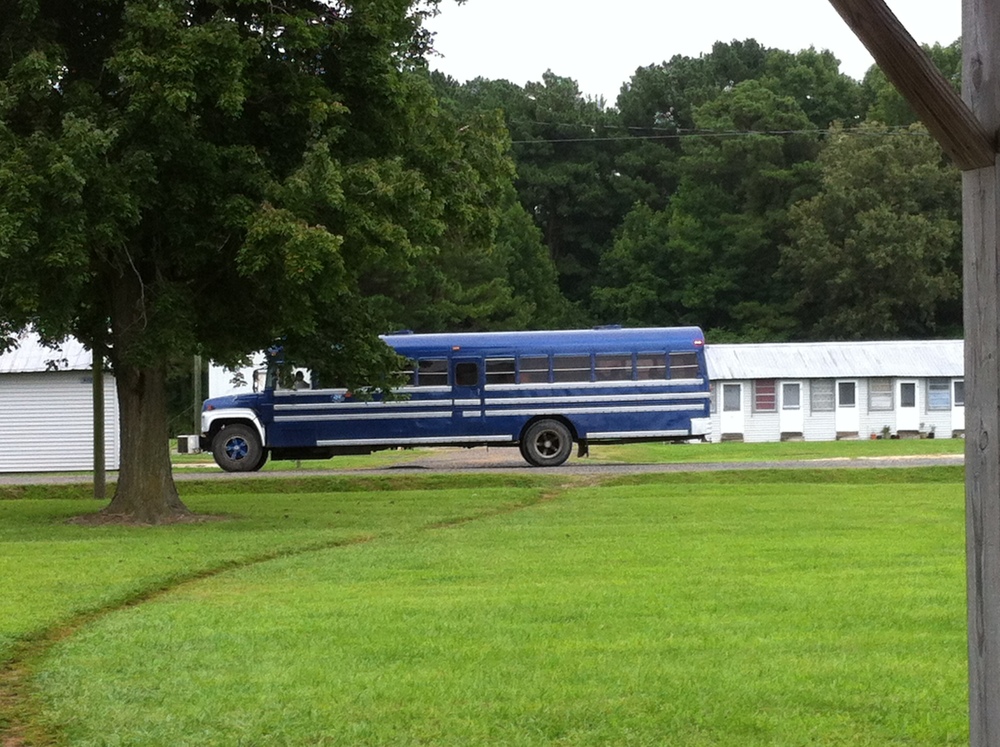 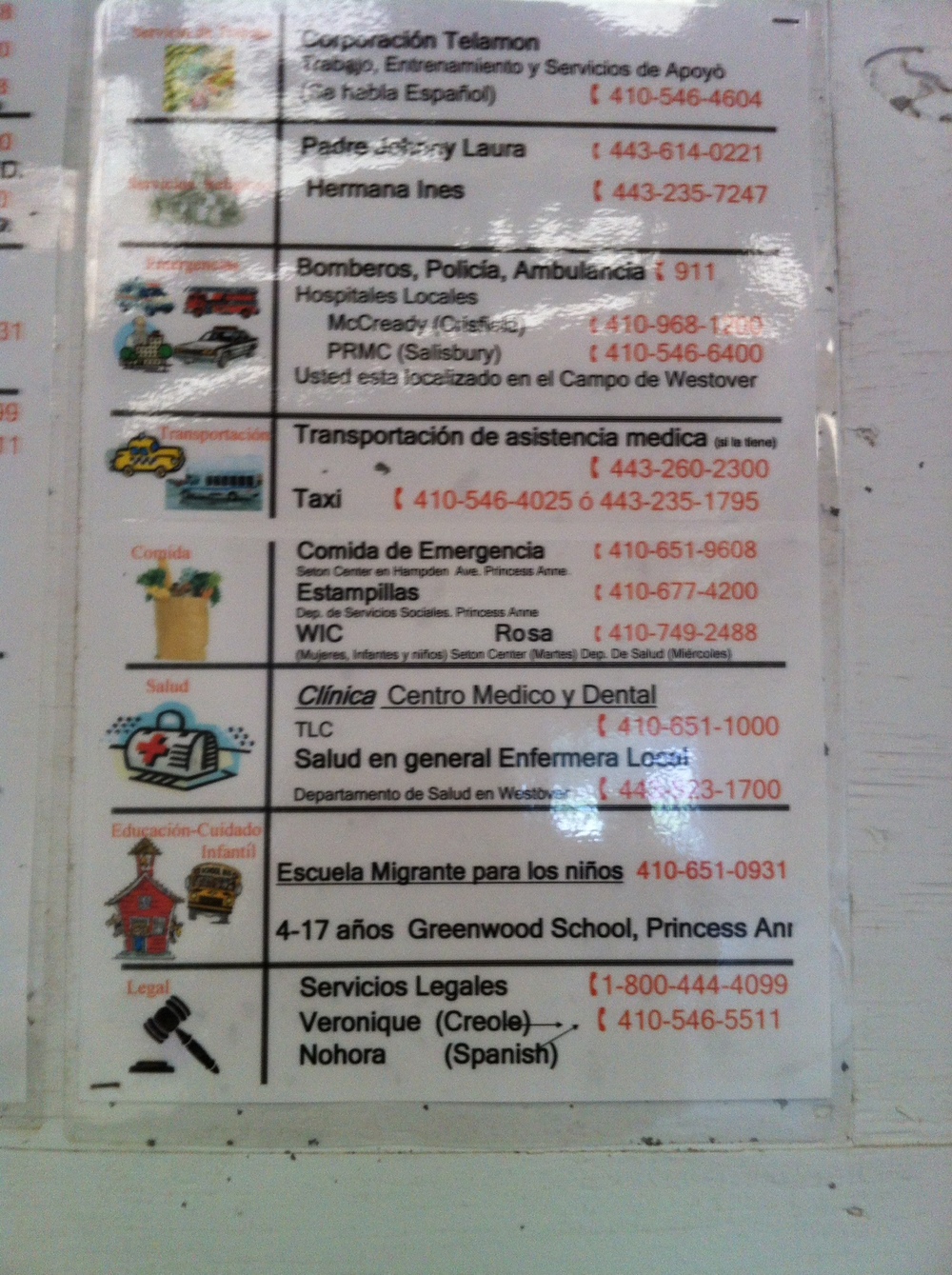 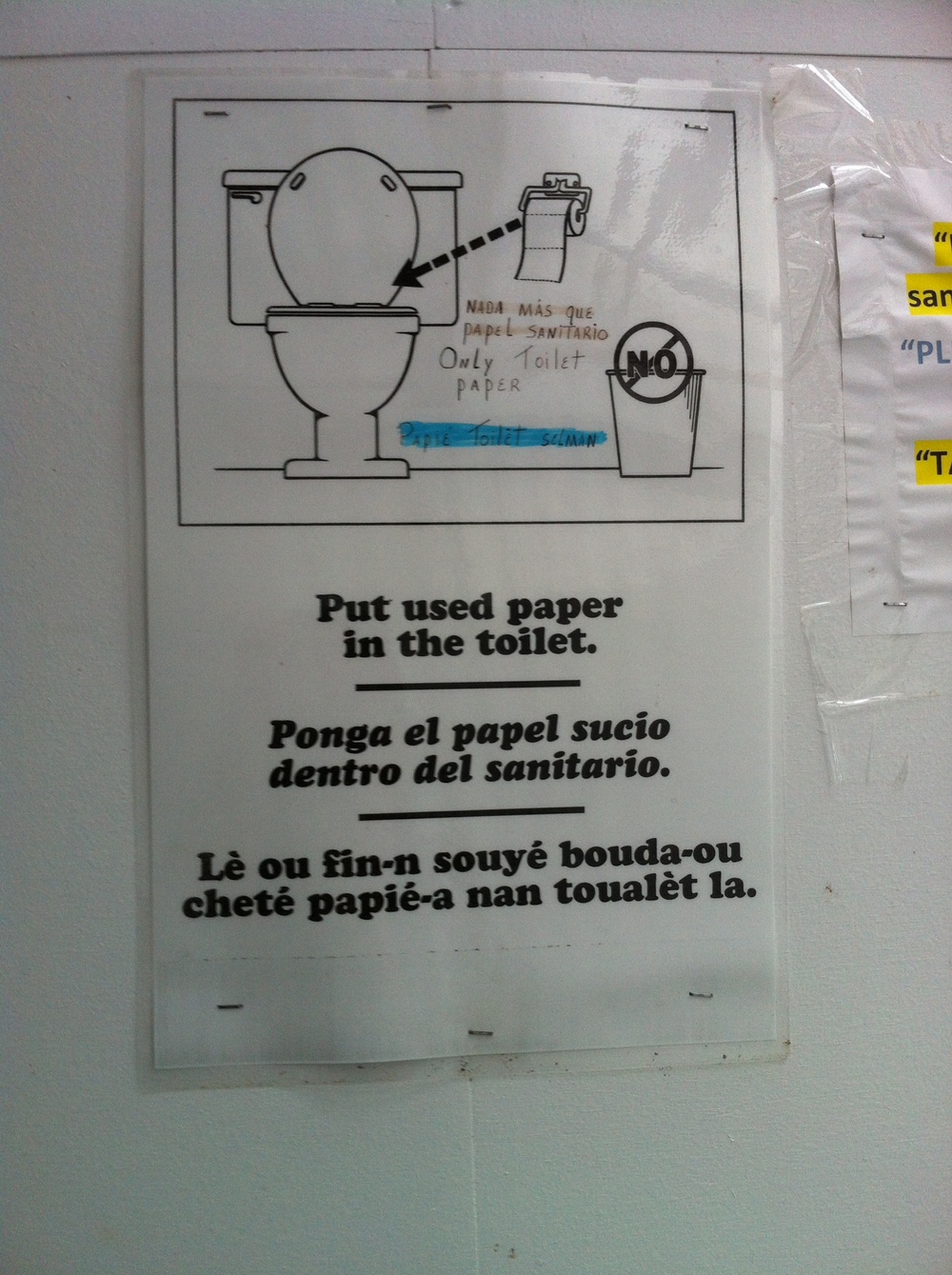 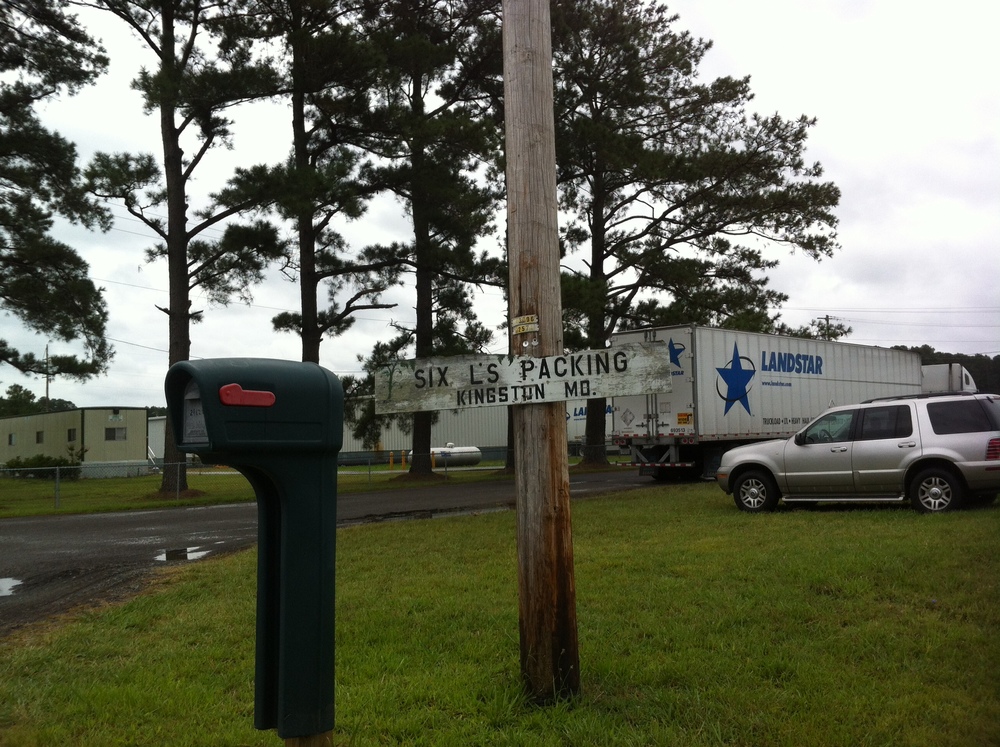 Old sign of the packing plant. Now owned by Lipman. 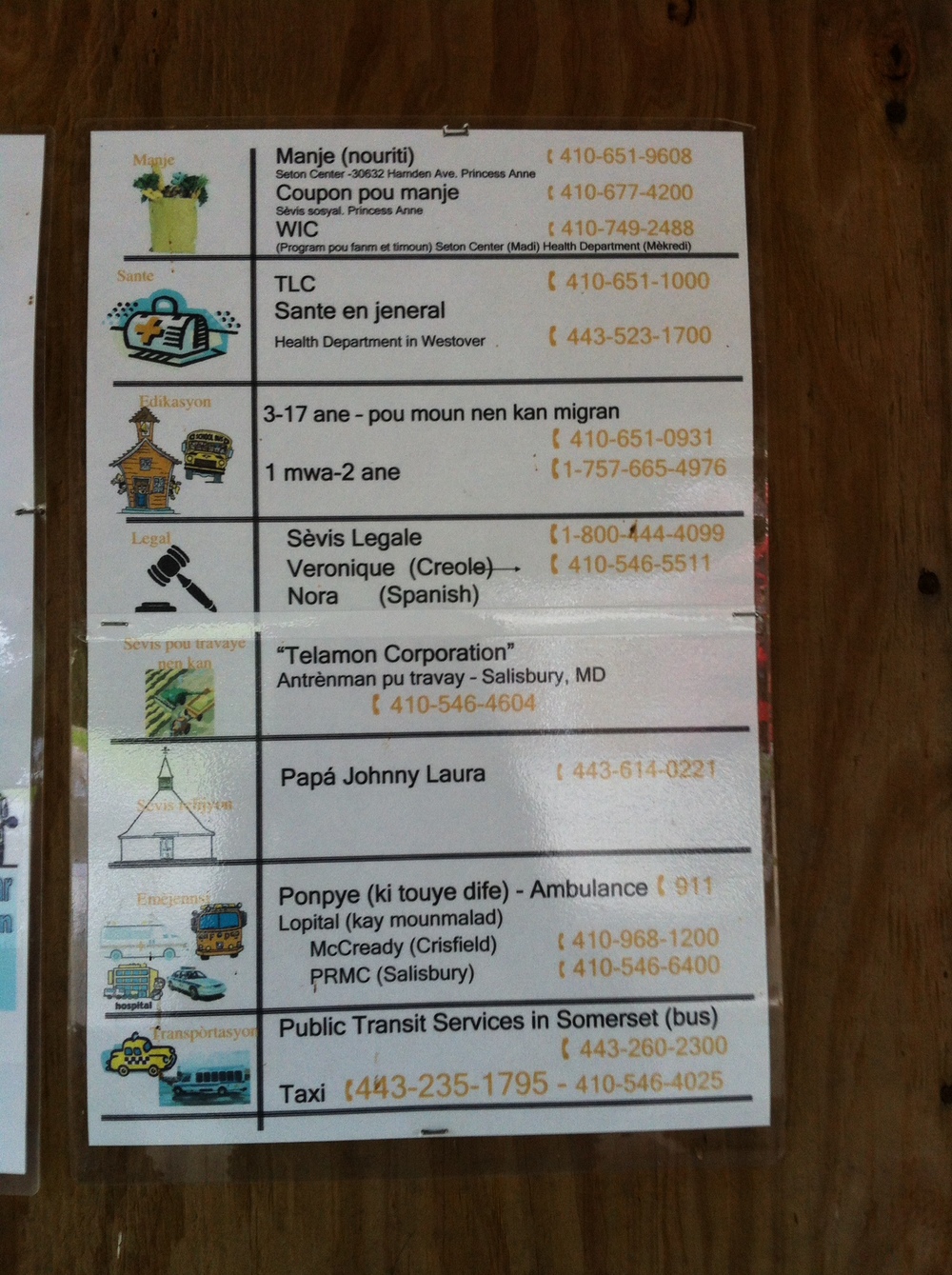 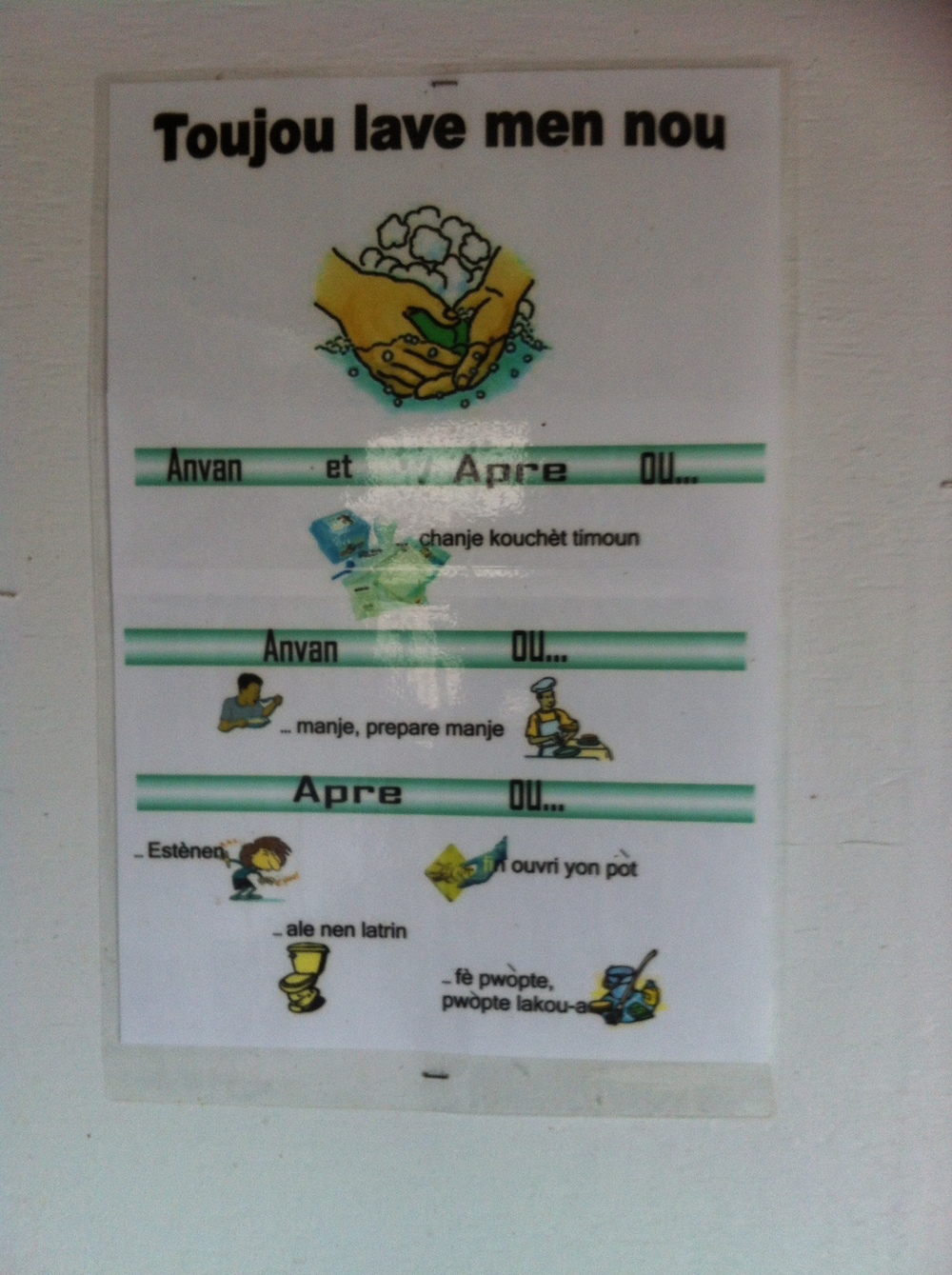 We headed through the middle of the camp grounds, where we saw another building that was spotless. It was the kitchen and dining area. The smell of baking and cooking still lingered. We also saw the washing station in another building. 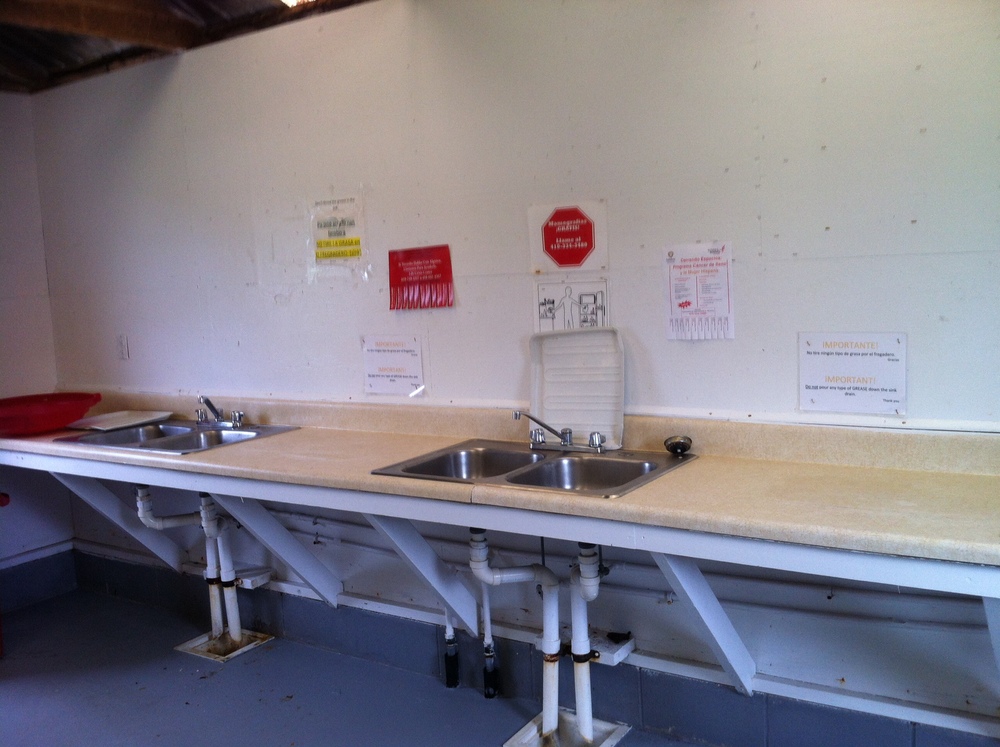 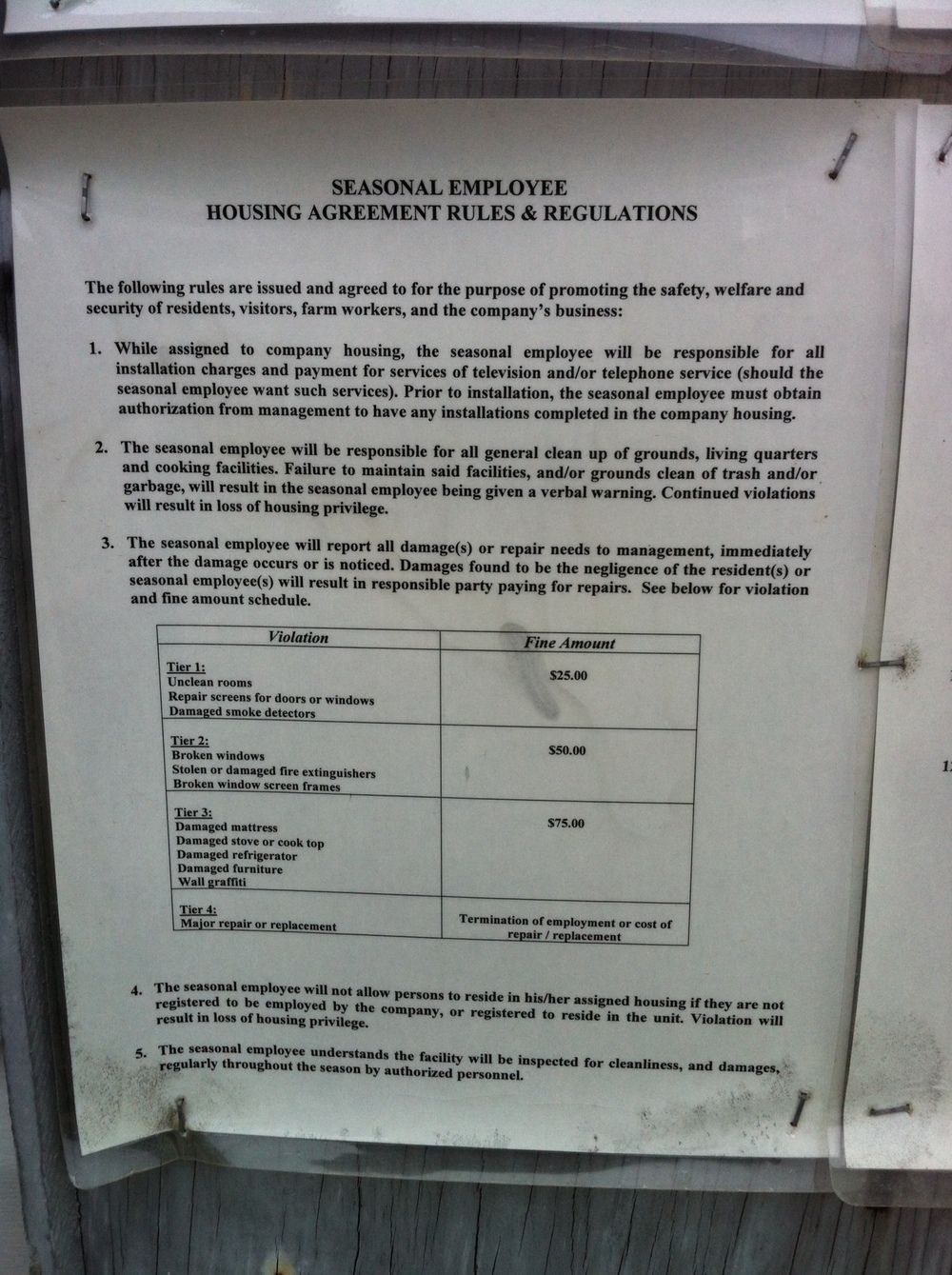 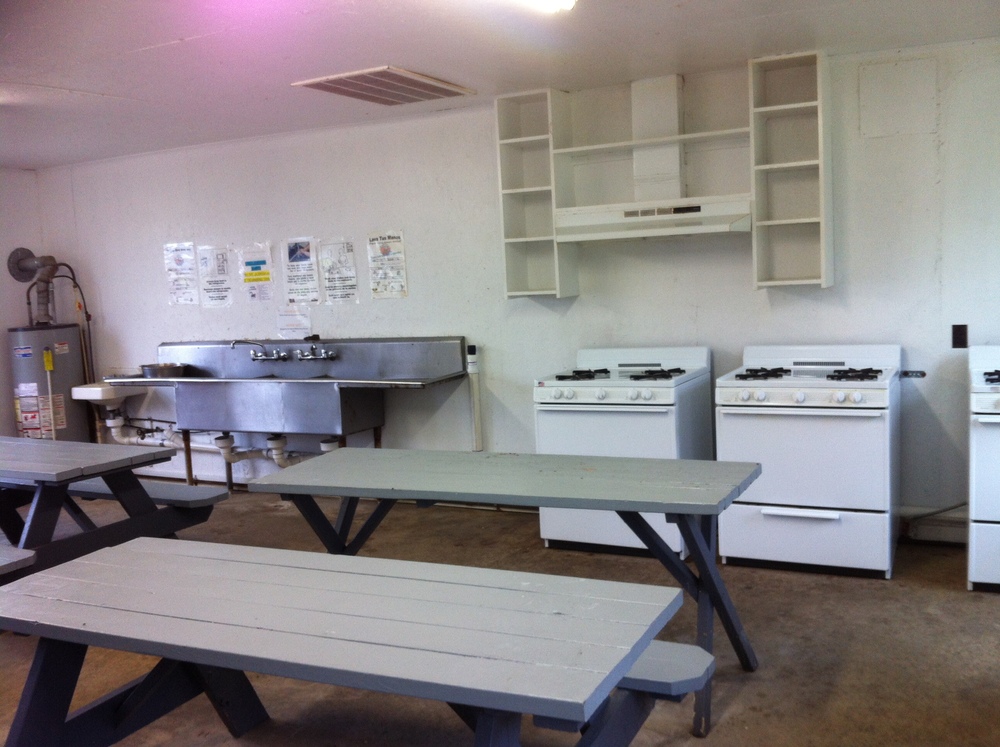 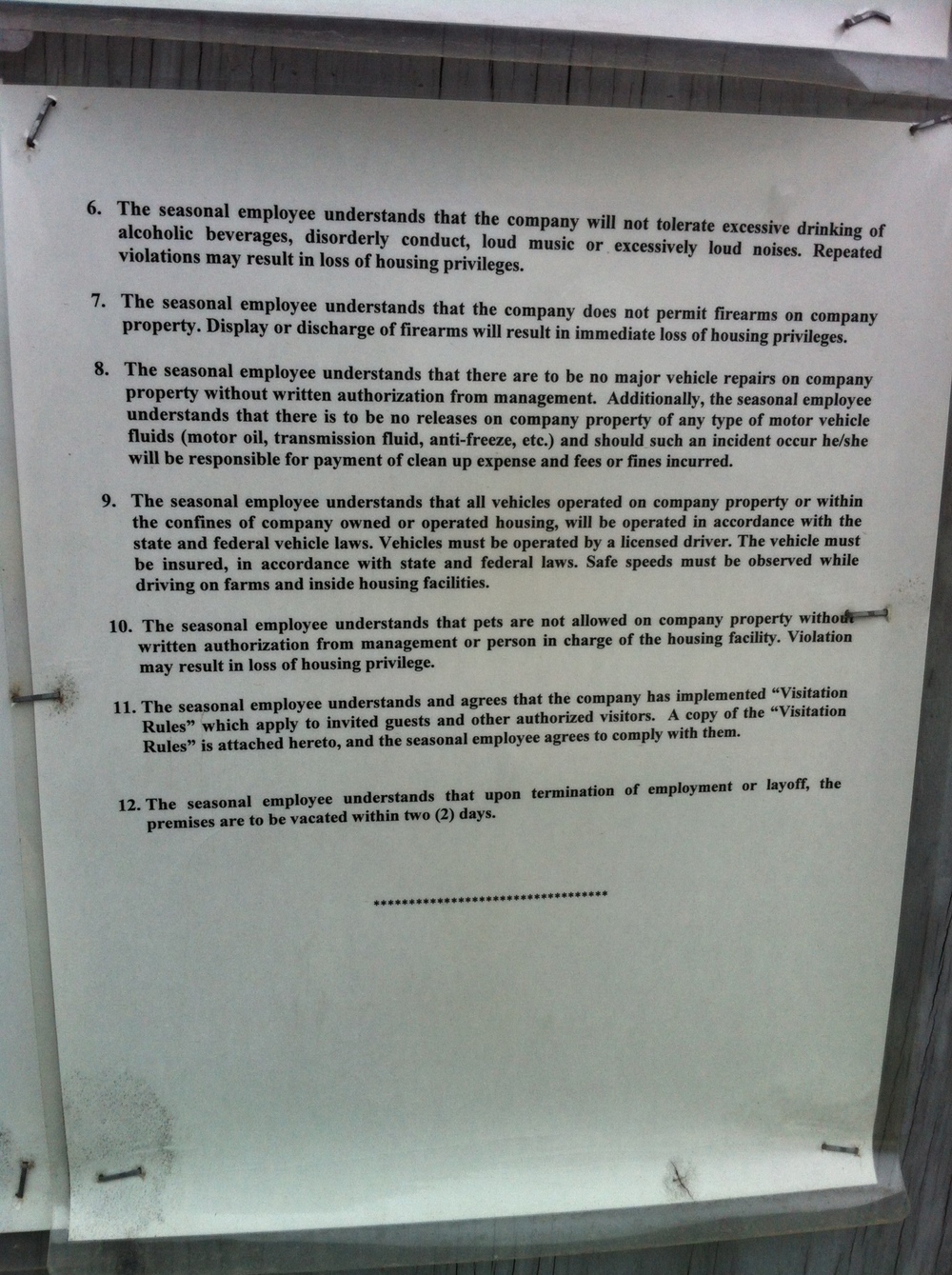 page 2 of the contract 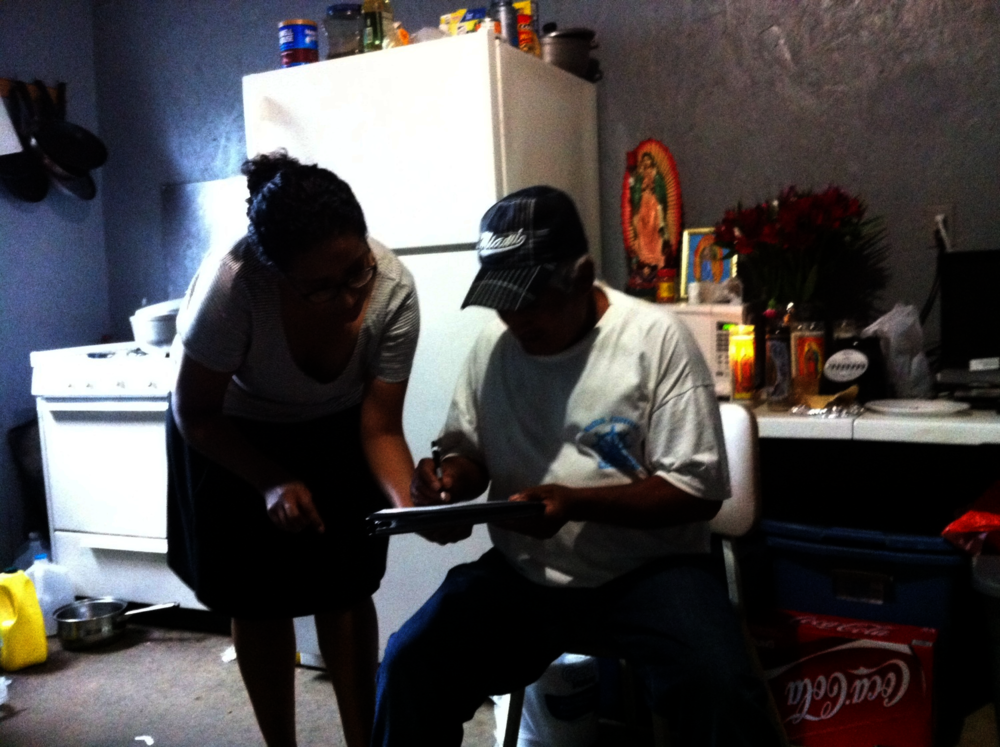 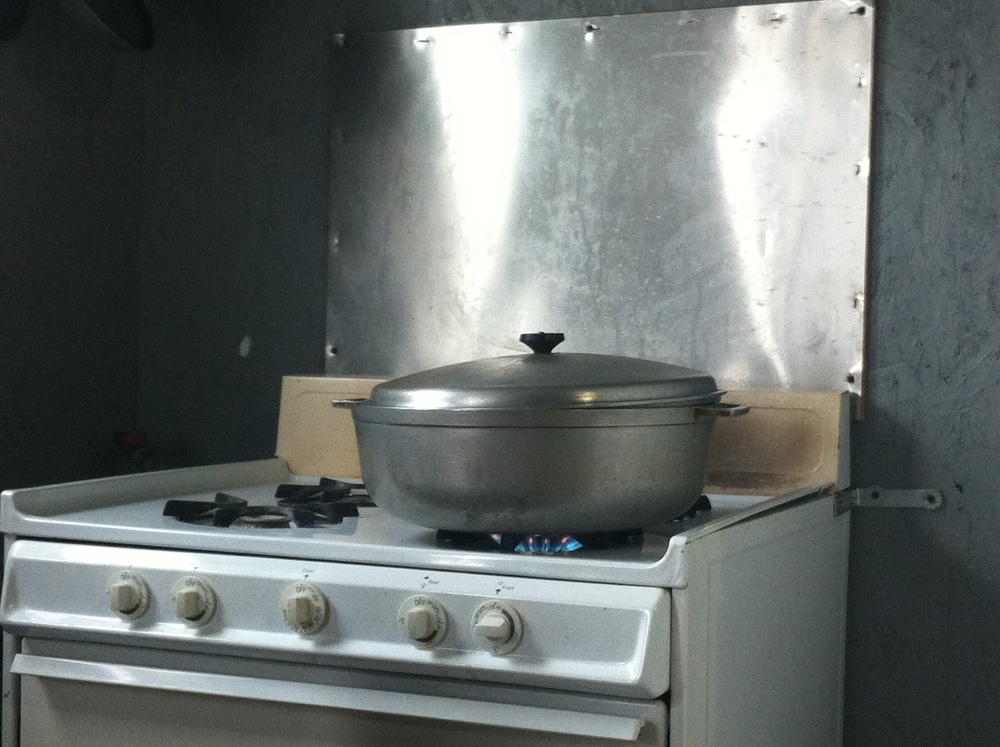 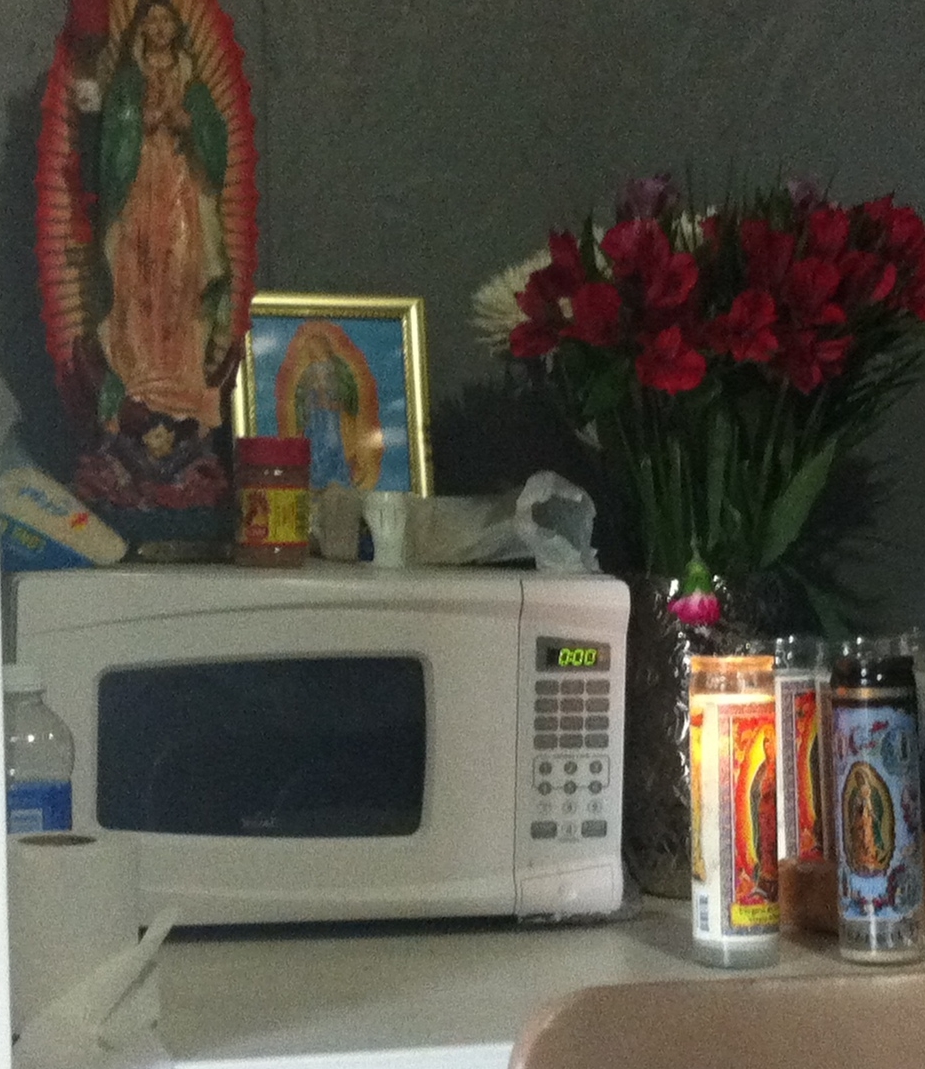 Home shrine for Virgin of Guadalupe 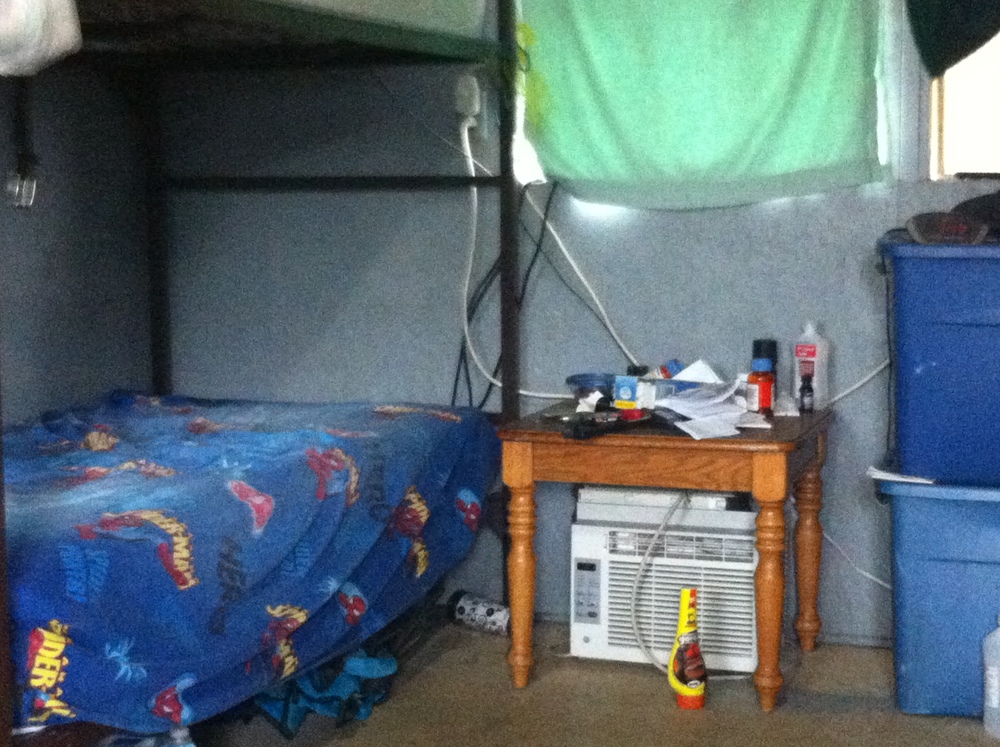