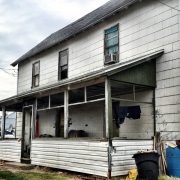 Immigrants provide a significant amount of agricultural labor in the United States and often live and work in exploitative conditions and substandard housing. Farmworkers are willing to accept poor quality or crowded housing provided by their employer because it is difficult to find alternate housing options due to fear, lack of housing availability, severe financial constraints, language barriers, and lack of transportation. Farmworkers can sometimes pay exorbitant rents for dilapidated apartments, motel rooms, trailers, mobile homes, barns or sheds and, frequently, basic necessities like adequate sanitation, safe water and electricity are lacking. Inside Francisco and Marina’s bathroom. The ceiling is partially caved in and has mold. Photo courtesy of Emilia M. Guevara

Francisco, a 50 year old man from Zacatecas, Mexico, lived in a run-down trailer with his diabetic wife Marina. He told us that he typically earned less than $11,000 dollars a year from farmwork yet he paid $80 a week in rent to his employer (approximately 38% of his income) and what he considered a large portion of his pay for what he considered mugre (dirt). Francisco and Marina invited us into the trailer by way of their waterlogged deck. Marina told us that she wanted the Lord to take her away from this misery as she timidly showed us her abdomen which was covered in sores. Some had healed over and turned purple but others were red and raised. She told me that she required insulin for Type I diabetes but the injection sites didn’t heal properly and eventually became infected.

She added that she tried to keep her house clean but the trailer was falling apart. Blankets covered all of the broken furniture. The rectangular trailer had a bathroom on either side of the structure, two small rooms, a small kitchen with shelves and a larger living room area. The first bathroom could not be used because the floor was collapsing and the linoleum was warped. Francisco told me that the floor rotted out around six months ago. He had called his employer several times but he refused to fix the damage. Francisco showed us the usable bathroom which reeked of sewage. The outreach workers told us that they had reported these deplorable conditions to the Dorchester County Health Department before but no one followed up. They told us that very little could be done to remedy Francisco and Marina’s plight because their employer was a lawmaker with a lot of clout in the Eastern Shore. We drove a few minutes away to Carla and Paco’s house and were greeted by a petite, fair-skinned Mexican woman with frizzy red hair. Carla smiled broadly at each of us and gave us all a warm hug. She quickly asked us inside her small home. The house was immaculate. The hardwood floors had been recently washed and waxed, her living room had a brown couch and loveseat, the pillows smelled of laundry detergent, and many framed pictures of family hung on the walls. Her friend sat in the living room and watched Univision on the flat screen TV while we went into the kitchen to chat. We sat down at the kitchen table while Carla began to knead dough into dozens of round balls. She was making flour tortillas for the week. Catfish and root vegetables cooked quietly in a pressure cooker. Carla had Type II diabetes but was careful to control her diet and exercise when she could. Carla worked half days while her husband worked as a manager of the farm, helping the young men harvest different types of vegetables. Paco worked from April through October and then, with Carla, returned to Zacatecas, Mexico until the next harvest season.  She told us she loved her employer because the company was generous with the pay, overtime and free housing. She told me that many years ago, she used to babysit the children of her employer. She has remained close to the family and was even invited to the weddings of the now adult children.

Marina’s housing conditions have made her susceptible to declines in mental and physical health, respiratory conditions in particular, as well as other hazards which increase illness. Carla’s housing has permitted her family to flourish economically, physically and emotionally. The quality and conditions of housing vary from farm to farm because the Maryland Department of Labor relies on employer adherence to federal and state safety and health standards, and there is little oversight unless there is a major complaint or a random inspection.