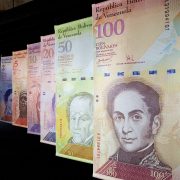 This summer, while conducting research on Maryland’s Eastern Shore, we encountered new groups of migrants who came directly from Venezuela to work in the tomato fields and packing plants. According to local providers, many of whom have over 20 years of experience serving the area, migration to the Eastern Shore from Venezuela is a relatively new phenomenon.

The appearance of Venezuelan migrants on the Eastern Shore coincides with a surge in Venezuela’s ongoing economic and political crisis. While the Venezuelan government has made efforts to stabilize the inflation depreciation spiral by introducing austerity measures to control the prices of goods, inflation has risen to astonishing levels – estimated to be 480% in 2016 and potentially up to 1,600% in 2017. Rising inflation has created a three-tiered exchange rate producing a situation where people are converting the Venezuelan Bolívar fuerte into U.S. dollars to ride out the next wave of devaluation. The scarcity of U.S. dollars in Venezuela has created a demand that continues to fuel the bottom rung of the black market exchange.

Understandably, many Venezuelans are anxious regarding their current circumstances, and are distrustful of the polarized language coming from both the current government’s attempts to blame intentional economic sabotage and the elitist opposition coalition’s rallying cry of governmental mismanagement. The uncertainty surrounding their economic prospects has forced many Venezuelans to find alternative ways to purchase food and goods and to acquire dollars to survive the volatile market. Yenni, a retired bank clerk from Oriente, Venezuela, resides at one of the migrant labor camps with her cousin. We met Yenni in her room at the migrant camp’s housing development. Her room was sparse, the size of a small dorm, just big enough for two twin beds, a refrigerator, a small table and a hot plate. A large fan occupied the middle of the room and clothing was folded neatly on the shelves above the bed. Yenni’s meticulously shaped eyebrows, silk shirt, and dark pink nail polish contrasted the bare room.

In Venezuela, Yenni acquired goods and services through bartering, using familial networks in other cities, or waiting in line for reasonably priced items at government-run food distribution centers. She had recently retired from an accounting job when the financial crisis hit. Her precious savings were soon used up and, with the mounting inflation, her monthly pension was worthless. Yenni was told by a relative that she could find work in Miami hotels so she and her cousin applied for tourist visas and purchased their plane tickets. In Miami, they stayed with friends of friends and went out every day in search of work. Unfortunately, no one was willing to hire them but they heard that farmwork was available west of Miami. She told us that at that point, they were willing to go just about anywhere to find work. Yenni and her cousin boarded a bus to Immokalee, Florida and became part of the East Coast migrant stream, eventually making their way to Maryland’s Eastern Shore. For Yenni and her cousin, all that mattered was receiving a weekly paycheck that allowed them to save U.S. dollars to bring back to Venezuela. Yenni’s work involved picking bruised and rotten tomatoes from a fast moving conveyor belt. She told me that it reminded her of the I Love Lucy episode where Lucy and Ethel were in the chocolate factory – except there were no chocolates and it wasn’t funny. While they were given stools and didn’t have to stand for 14 hours at a time, there was no air conditioning and little ventilation. The only thing that kept them cool was their own sweat and a couple of lukewarm bottles of water that they brought from the camp. She noticed that the managers had access to nice, cold water from a large watercooler inside the office but they never offered any to the workers.

After the long interview and our long chat, Yenni told us that she had to get up at 6 AM to work another long shift. She was going to go take a long, cool shower and go to bed. Before we left, we asked her what she thought of her experience on the Eastern Shore. She told us that “there’s opportunity but you give up a lot too. People work hard here and they don’t rest. They work during the harvest season and then they go to another region and do it all over again. They only know their children on the phone. They don’t even know their grandchildren. Oh, no! It’s awful. It’s not for me. It’s too much just to work and work. Someone actually asked me if I wanted to stay here because things are not going well in Venezuela. What about my family? What am I going to do here sad and alone? In the end, what would I have? What I’d really have is nothing at all.”

Somerset County: A Crisis in Health

Health and Housing: A Tale of Two Farmworkers
Scroll to top