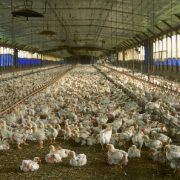 The poultry industry in the United States is the world’s largest producer of poultry meat. Our consumption of poultry meat is considerably higher than beef or pork. The Delmarva Peninsula, an area 200 miles long that includes part of Delaware and the 11 Eastern Shore counties of Maryland and Virginia, is the fifth largest poultry production area in the United States. It is widely known as the origin of the commercial broiler industry, the process by which broiler chickens are reared and prepared for meat. Today, Delmarva’s broiler industry consists of five major poultry plants (Tyson Foods, Perdue Farms, Mountaire Farms, Amick Farms and Allen Harim Foods), which together employ 21,000 workers, and consist of 2,800 contract growers, 10 feed mills, and 15 hatcheries. Poultry production today occurs primarily in enclosed buildings to protect birds from the weather, predators, and disease. This has allowed farmers to greatly increase production efficiency while significantly reducing the amount of labor required. It has also resulted in environmental challenges with production of larger volumes of manure in much smaller areas.

In recent years, the poultry industry has been widely scrutinized by various consumer protection and animal rights groups for questionable food safety practices and animal cruelty. For instance, in the last week, environmental groups in Delaware, Maryland, and Virginia have called for a moratorium on the building of chicken houses on the Delmarva Peninsula because the phosphorus from poultry manure is thought to reduce water quality and impact surrounding land and water systems.

Topics related to food safety and animal welfare have received far more attention than the safety and health hazards experienced by poultry industry workers. Although most of poultry processing is mechanized, companies rely on workers to correctly position chickens for the machines to be accurate. The most difficult work is done by the live hangers who remove live birds from shipping crates and suspend them from hooks at a rate of 25 per minute, all while the chickens scratch, peck and defecate on the workers. Assembly line workers must keep a pace where they use sharp shears, knives and their own hands to eviscerate chickens and take the innards out. Delicate work like deboning continues to be done by hand, resulting in injuries to workers’ hands and arms. Such harsh working conditions and low wages drive a very high turnover among poultry industry workers.

Today, immigrant workers constitute a significant proportion of the worker population on poultry farms and in poultry slaughter and processing facilities throughout the United States. In Delmarva, it became more difficult to recruit and retain local African American workers who once provided the key labor supply for chicken processing due to harsh working conditions and continuing low wages. Immigrants and asylum seekers from Mexico and Latin America (primarily from Guatemala) filled this gap beginning in the 1990s. Many of these laborers were former agricultural workers who left the migrant stream. More recently, the area has seen an influx of Haitians granted Temporary Protected Status (TPS) (who have joined the labor pool. We have been conducting ethnographic research with Haitian immigrants living and working on Maryland’s Eastern Shore since August 2014. Many of these individuals currently work in the poultry industry, were former workers, or have family or friends who work in the industry. Our work has revealed that once workers become sick, disabled (usually at work) or elderly, their hours are reduced or they are fired. An older yet physically able Haitian man described how he first had his hours reduced and then had been fired as he got older. Now to support his family, he works as a seasonal tomato picker in a local tomato plant hauling many bushels of tomatoes a day.

Many of our Haitian informants have also described harsh working conditions. A woman whose father works in the poultry plants described his health effects after chronic exposure to toxic chemicals like ammonia and chlorine used to disinfect the contaminants in the poultry, “He started to have arthritis pain but right now he’s not complaining of it. But from working in the cleaning part for a very long time, he doesn’t smell very well.”

Additionally, many have described the overt racism that they face from the managers and other workers. A young man who no longer works in the industry told us, “The boss would yell at you to speed up. Fast speed! Why are you slowing down? When you’re Haitian, can’t defend themselves. We don’t have the language skills. White Americans treat blacks poorly, treats Haitians worse. Haitians are lower than Latinos.”

Somerset County: A Crisis in Health
Scroll to top